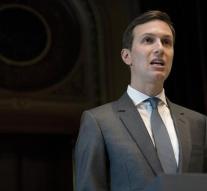 washington - UPDATE- Jared Kushner, son-in-law and senior adviser to US President Donald Trump has regularly used a private server for sending email. He did that to people from the White House presidential staff. White House and Government staff are not allowed to use a private account for official work.

Kushner's lawyer Abbe Lowell has confirmed in a statement that his client between January and August of this year 'sent and received less than one hundred e-mails via a private account. '

According to Lowell, it was mainly about mail that went on Kushner's job but was sent to the private address by mistake. These mails have been forwarded to the official White House mail address. The mails are stored on the White House, as legally required, and at the same time removed from the private address

Website Politico unveiled the case. According to the site, more senior employees around Trump have done the same thing. The magazine does not mention names, but reports that Kushner's wife, Ivanka Trump, also has an email address on the same domain as her husband. The daughter of Trump is also an official adviser to the president.

Hillary Clinton writes in her recently published book (What happened) that she is convinced that this affair is one of the main reasons why she loses the election of Trump. She was released by FBI director James Comey in July last year, but Comey returned to the case a few days before the elections. Clinton has never been charged.