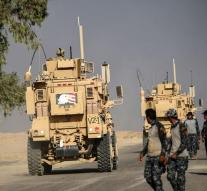 mosul - Iraqi forces have liberated the district of al-Shura, an area southeast of Mosul. The terrorists of the Islamic State have been displaced. The area is about 45 kilometers from the famous ruins of the Assyrian city of Nineveh.

Not far from al-Shura have according to Iraqi media units of the federal police occupied the area Tel al-Samn. The Supreme Command of the Armed Forces in Baghdad is pleased with the progress of the campaign so far.

During the march supporting sixteen flights Tuesday were carried out by the coalition led by the United States. The air attacks focused on IS positions in Mosul itself. Thirteen goals have been destroyed, with 35 IS fighters were killed, according to the command.

The media also report an assault of young fighters in the northern Iraqi city of the headquarters of IS. They put a car on fire, hoisted the Iraqi flag and then disappeared quickly.