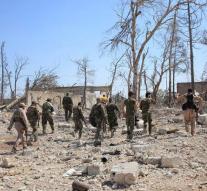 aleppo - The rebels in Aleppo will be under increasing pressure. The government army and its allies now have control over the entire south of town.

There was until recently the last nursing corridor to the eastern districts, where the insurgents pursuing the departure of President Bashar al-Assad still in control.

This was announced by the Syrian Observatory for Human Rights Thursday. The state news agency Sana and the groups fighting the regime itself reported the advance of the Syrian army. The supply route for food and other relief items has been cut off. An estimated 300 000 people were dependent on it in the still besieged parts of Aleppo.