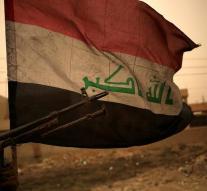 baghdad - Iraqi forces are Wednesday advanced to the outskirts of the town of Hammam al-Alil southwest of Mosul. Aid organizations and Iraqi regional officials say Islamic State (IS) has executed in Hammam al-Alil dozens of prisoners.

According to staff of the United Nations wants the IS about 25. 000 remaining civilians from the town away to use them as human shields in defense of Mosul. Before IS the town was in the hands, Hammam al-Alil were an estimated 65 000 people.