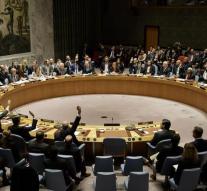 new york - The UN Security Council on Friday in New York accepted the resolution in which Israel is asked to stop building settlements on occupied Palestinian territory. The delegate of the United States abstained, even though it was until the last moment lobbied for an American veto.

New Zealand, Malaysia, Venezuela and Senegal demanded that the Council, which consists of fifteen members would vote on the resolution sponsored after Egypt withdrew Thursday under pressure from Israel and the forthcoming presidential Donald Trump.

Israel and Trump then urged the US strongly to make use of the veto. That did not happen this time. Fourteen delegates appeared before yielding their applause. It is the first time in nearly eight years that the UN organization adopts a resolution on Israel and the Palestinians.