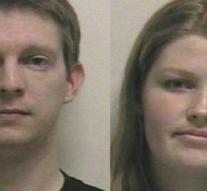 utah - Two parents from a family in Utah have been detained and suspected of child abuse, in a case in which the 5-year-old son has suffered heavily. A doctor who examined the boy found that his skin had 'an orange tint'.

He was locked up in a basement room, with only one bed and a blanket, twelve hours a day. There was no light. If he had done his need, the boy hid his feces in a hole in the room, fearing his parents.

For each meal, the boy had to eat a bowl of carrots. 'If he did not have it within a certain time, if he did not have the rest of the meal,' the Utah authorities explain in a statement. 'If there were still roots left, they were kept for the next meal, and sometimes the next day. '

When the boy, whose sister was also adopted by the same family, bought something in a store, he got his head off his head: he had not eaten any carrots. Also, he did not get pizza on an evening because the parents had set up a very short time in which he had to eat the roots. That did not work out and the pizza was on.

31-year-old Brett Tobiasson and 27-year-old Clarissa Anne Tobiasson have been arrested by the police and are still stuck for a moment. Their arrest follows after a month of investigation. According to some media reports, Clarissa would have told a friend to invent the roots 'because his son did not like it'.