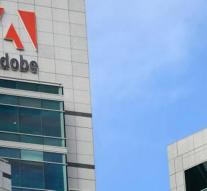 san josé - Adobe stops developing and supporting Flash. By the end of 2020, the application will disappear, the software company announced on Tuesday.

Flash is mainly used to play games and watch videos on the internet. However, in recent years, popularity has decreased after several security issues. For example, in 2014, 80 percent of Chrome users visited a website with Flash every day, which is only 17 percent.

The use of Flash, which has been unpopular on the internet for many years, has already been rejected by Adobe. In addition to a security risk, the plug-in also draws batteries by heavily burdening the computer. For Flash, there are better alternatives today.