Home / Tech / Adele and James most viewed on YouTube 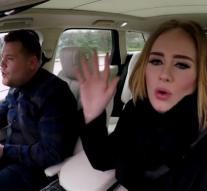 - Adele and James Corden have added a new record to their name. The images of their carpooling Karaoke are best viewed on YouTube over the last year.

According to the online video platform, the duo is best viewed with the popular karaoke segment of The Late Late Show with James Corden. Since the video with Adele appeared online in January, the singer and the singing host more than 135 million views on YouTube.

The great success of carpooling Karaoke has even led to the segment is transformed into a private show. CBS will do the cooperation with Apple. James Corden is involved in the production, but will not take his statement presentation.

On the second place of the most popular videos is the Pen-Pineapple-Apple Pen finished, thanks to Justin Bieber announced via Twitter that he was his favorite movie on the Internet. The half-Dutch Grace Vander Waal scored her audition for America's Got Talent and earned the fifth spot in the top 10. Also, this video showed Bieber managed to impress. Grace also won the talent show.

In the top ten most viewed music videos Fifth Harmony, this year in the lead, with their numbers Work from home. Calvin Harris and Rihanna (This is what you came for) ended up in second place, followed by Nicky Jam (Hasta el Amanecer), The Chain Smokers and Halsey (Closer) and Rihanna and Drake Work.

An overview of the top 10 according to Variety:\n  \n  \n   advertisement