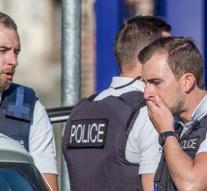 brussels - Belgium takes extra security measures after the attack with a machete on officers in Charleroi. That Prime Minister Charles Michel announced Sunday after a meeting with the security services.

These include measures for the safety of police officers, said Michel, who Sunday morning from his holiday address in France to Belgium has returned. The meeting with the security services in Brussels itself was also accompanied by unusually heavy security. Soldiers and police officers secured the area and tarps were placed to block the view.

The man struck Saturday afternoon in front of the police station on the Boulevard Pierre Mayence. Charleroi is deceased to his injuries. According to the police summoned the offender,, Allahu Akbar 'as he shuffled with a machete. An officer ran deep cuts on her face, Belgian media reported. Her colleague came with minor injuries.