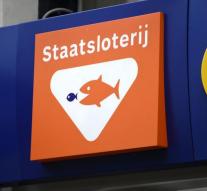 the hague - Over 2.8 million (old) players compete with the extra draw of the State Lottery on Saturday. The draw is part of the agreement that has been concluded with the Stichting Staatsloterijschade claim.

The prize pool is 13.5 million euros with five main prizes of one million euros. In total, approximately 8 million lots were distributed among the participants.

The State Lottery hopes to restore confidence in the years of deception of the shots. The State Lottery did not mention between 2000 and 2008 that non-sold lots were included in treasures. As a result, prices could fall on lots that were not sold, which meant that the shoppings were smaller than the consumer thought.