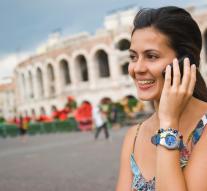 strasbourg - Additional costs for calls and mobile Internet in other EU countries as of June 15, 2017 history. On 30 April next year, this so-called roaming charges are already reduced.

About this had been agreed. The European Parliament vote in Strasbourg on Tuesday finally join in. The European Commission and Parliament wanted to abolish roaming charges much earlier, but the Member States led to delay in fear of large losses on their telecom companies.

As of April 30, 2016 allowed providers up to 5 cents per minute extra charge for phone calls, two cents for a text message and 5 cents a megabyte.