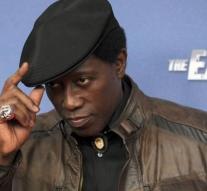 The virtual reality movie takes 13 minutes and is part of the movie The Recall, about an invasion of alien creatures. The 54-year-old Snipes produced the virtual reality movie featured on Samsung's Gear VR and Google's Daydream. 'The world of entertainment is changing rapidly,' Snipes tells The Wrap. 'This is a new way for fans to experience content, you feel your part of the movie!', Continues the Blade actor.

For $ 10 fans can play and fight with Snipes and Mitte in their battle against alien creatures.