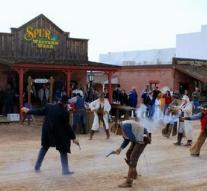 tombstone - Tourists Sunday to the American town of Tombstone ( Arizona ) came , did get a very realistic picture is presented of the Wild West. Actors played a firefight 19th century between cowboys and law enforcement . The shooting was so well acted that soon had to be removed two wounded. An actor appeared accidentally to have real bullets instead of blanks in his gun.

According to US media discovered actor Tom Carter his faux pas when colleague Ken Curtis groaning to the ground was because he was hit in the leg.

His gun turned out to be monitored because Carter was almost late for the show. When officers checked his gun, they saw that Carter still had fired four bullets.

One of them was 700 meters away hit an unsuspecting woman. The show was part of the Helldorado Days, a multi-day festival.

Hundreds of thousands of people flock every year to Tombstone. It was recently removed all the asphalt in order to restore the dusty dirt roads of yesteryear alive.