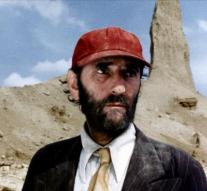 los angeles - The American actor Harry Dean Stanton passed away at the age of 91. His agent announced Friday night (local time) that he was 'seated quietly in a hospital in Los Angeles.'

Stanton, born in 1926, participated in more than 100 movies since the mid-1950s, including The Green Mile, Alien, Pretty in Pink, Paris Texas, Repo Man, The Last Temptation of Christ and Wild at Heart.

He was also featured in more than fifty television series. Stanton continued to act until his death and also participated in new episodes of the Twin Peaks series this year.