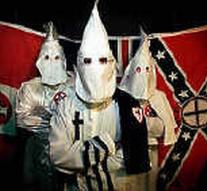 - Hackers from the group Anonymous activists have begun with the publication of personal data of alleged members of the Ku Klux Klan. The ' hacktivists ' say they will reveal the identity of a thousand KKK members.

Simultaneously, the group wants to start a campaign on social media against the racist movement, American and Canadian media reported Monday. There is, however hashtag #HoodsOff. KKK members promote their rituals a white mask pointed to remain unrecognizable.

The hackers action follows the announcement of the so-called Million Mask March, which the KKK wants to commemorate that a year ago a white cop who shot and killed a black teenager, was not prosecuted.