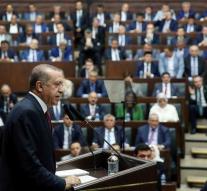 ankara - Members of the main opposition party in Turkey have been sitting in parliament in Ankara to set new rules restricting their possibilities in the people's representation. They find that their freedom of expression is cut down.

For example, the rules state that parliamentarians may not make 'illegal referrals' to Turkish regions. Thus, they can no longer speak about 'Kurdistan' or 'Kurdish province', terms often used by the pro-Kurdish party HDP. If they do, they can be suspended after three votes by their colleagues for three meetings. Furthermore, the new rules cut the speaking time of parliamentarians.

The campaigners are from the Republican People's Party CHP. They started their action Wednesday evening after the new rules were approved. 'We will not go away tonight,' announced a member of the party.