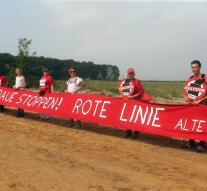 erkelenz - Also on Saturday, protesters in Germany, just across the border with Limburg, have taken action against lignite stations. A group of hundreds of activists has been active for a few days. A few hundred Dutch have also joined. A spokesman says that the goal for Sunday has been reached: blocking a railway line at a lignite plant.

The organization is in the hands of Ende Gelände, a German movement who opposes lignite extraction because it is particularly polluting. According to the club, the lignite industry in Rhineland-Palatinate is the largest source of CO2 emissions in Europe.

According to the spokesman of the Dutch, united in Code Red, the actions are peaceful, but there is a lot of police on the leg and it's a mess here and there. The power station Neurath had temporarily reduced its production on Saturday

Code Red continued action in the port of Amsterdam by a coal surplus in June.