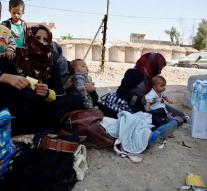 - Armed extremists on Friday attacked government buildings in the Iraqi city of Kirkuk, the BBC reports. Suicide bombers blew themselves up at police stations in the city and a power plant. Iraqi security forces have repulsed the attack.

The group Islamic State said to be behind the attack. The IS-fighters would have invaded include City Hall and have occupied a hotel.

Authorities in Kirkuk have imposed a curfew.

The attack in Kirkuk coincided with an offensive by Iraqi government forces and Kurdish militias to liberate occupied by IS city of Mosul in northern Iraq.