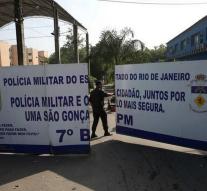 rio de janeiro - Justice in Brazil has issued arrest warrant for 95 police officers in Rio de Janeiro who would have provided weapons to drug gangs. They would also have tipped the gangs about police operations.

It is the biggest arrest wave due to corruption among agents so far. Thousands of police officers were arrested on Thursday. The investigators say it's meant to be police officers who maintain ties with the powerful drug gangs who have parts of Rio in their power.