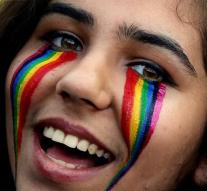 marrakech - Two Moroccan girls who have been tried in Marrakech because of homosexuality, its acquitted Friday. The judge ruled that they should be handed over to their parents, Moroccan media reported.

The teenagers Hajar (17) and Sanaa (16) October 28, were arrested after a relative with pictures of the two who had gone to the police kissed. The judge ruled that the parents of the two girls kissing to pay the costs.

The arrest led numerous associations and action groups in the gun and also attracted much attention outside Morocco. The activists campaigned for the release of the two kissing girls and for the abolition of the article of law which criminalises homosexuality in Morocco. There is a prison term of six months to three years.