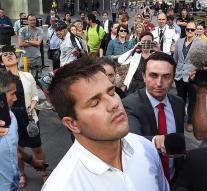 - The 30-year-old Gable Tostee who is suspected of murdering New Zealand Warriena Wright (26) after a Tinder-appointment, was acquitted. So says the court in Brisbane in Australia. In the incident Wright fell 14 floors down from the balcony of the apartment of the Australian Tostee.

Prosecutors claimed that Wright after an argument so afraid was Tostee that she fell while attempting to escape from him. The two first met the night she died, and went back to his apartment on the Australian Gold Coast.

During the trial, said prosecutor Glen Cash Tostee which so intimidated the victim and threatened to climb down from his balcony was the only way for Wright.

During the meeting also heard an audio recording, made on the phone Tostee. To that is an argument to be heard between the two, and the fatal fall. Prosecutor Cash claimed that Tostee became angry after Wright ornamental stones tossed at him and hit him with a telescope. 'You're lucky I do not push my balcony. If you're trying to get something out, I'll beat you knock out 'Tostee says on the recording.

One of Tostee's lawyers Michael Purcell said his client 'relieved' after the verdict was.