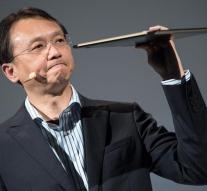 - Acer will soon be on the market as well as the thinnest to the thickest laptop in the world. The Swift 7 is not yet centimeters thick, the Predator 21X measuring about ten centimeters. The laptops were presented at the fair IFA in Berlin.

The Swift 7 is thinner than the MacBook from Apple and HP Spectre 12. Yet he has 8GB of internal memory, 256GB of storage and a 13. 3 inch full HD screen. It weighs just over a kilo. The laptop comes in October in Europe on the market and will cost at least 1299 euros.

The Predator 21X weighs eight kilos. It is the first laptop with a curved display. It is designed for the gamer, with 64GB of internal memory and 4 terabytes of storage. The laptop will have five fans for cooling. There are also eye-tracking sensors that constantly monitor the user is looking at. A gamer can then aim by looking at somewhere.