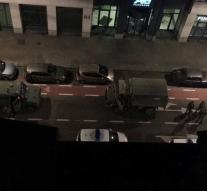 brussels - The man who attacked three soldiers in Brussels on Friday night also had a firearm and two coronas with him. He was shot down and died in a hospital. The perpetrator is a Somali Belgian. His house in Bruges was searched for Friday night on Friday. In the interests of the investigation, the justice did not want to say what the search had accomplished.

The man was knocked in his hands to the soldiers on the Émile Jacqmain Avenue, on the edge of the Brussels center, not far from the famous Grote Markt. Two soldiers became light-wounded. The perpetrator called twice, Allahu Akbar. Justice treats it as a terrorist act. The mayor of Brussels, Philippe Close, stated that it is an isolated act of a single individual.

The perpetrator was born in Somalia in 1987. He joined Belgium in 2004 and received Belgian nationality in 2015.