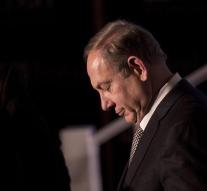 washington - The US abstention in the vote on Friday in the Security Council on a resolution unacceptable to Israel was not a dig at President Barack Obama towards Israeli Prime Minister Benjamin Netanyahu.

'The US policy has long been opposed to the settlements. The reason we have taken this step because we have an acceleration in the growth of settlements seen in recent years. If this trend continues the two-state solution impossible, 'said Rhodes.

Israel and president-elect Donald Trump had urged the US to use the veto. After fourteen of the fifteen delegates had voted for the resolution, Trump tweeted that it's all different for the UN after 20th January.

Deputy Security Adviser Rhodes said Trump's attempt to influence the US position 'unusual. '' As of January 20, he is responsible for US policy. Up to 20 January President Obama. That is how it works. There is only one president per term. '

Israel felt abandoned by Obama heavily down and has now established the hope Trump. 'The Obama administration has not only failed to protect Israel against these gangs in the UN, pitched behind the scenes together,' said Prime Minister Benjamin Netanyahu.