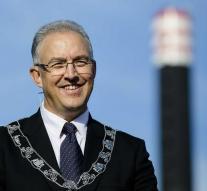 rotterdam - Mayor Ahmed Aboutaleb of Rotterdam late if necessary just to hold large groups of people as happened around the game between Feyenoord and Roda JC on February 21 of this year. Action by the police, 326 men, women and children picked up and held for hours, was correct and legitimate, he wrote to the Rotterdam city council. The mayor refused Thursday during a debate to offer apologies for the measure.

He likes best to say sorry to people who have been long in uncertainty since suffered from poor have had and of having slept.,, But a generic gesture for what happened there, I do have qualms. Because it does not reflect the actual conditions on the ground. ''

The council discussed Thursday the critical report by the National Ombudsman. According to him, the group arrest was unnecessary and have many supporters hours innocently detained, including dozens of minors.


There is, according to the mayor, the police and the prosecution, however,, not infringe the fundamental rights of the arrested persons. ' The show is worse occur as in previous disorder when Maasgebouw was stormed by an angry mob.,, The commitment of the group approach focuses on keeping preventive standing of individuals to prevent escalation. ''

However, they say they are sorry that people who unwittingly caught up in the demonstration were hit, were arrested. For a few hours before, and not be allowed during the hours following the match Feyenoord in preventing future problems will (un) announced demonstrations at De Kuip.