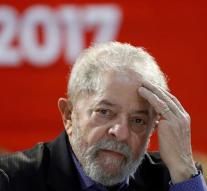 curitiba - The Public Prosecutor of Brazil wants former president Luiz Inácio da Silva behind the bars. The former head of state and six other suspects have to be sentenced to imprisonment for corruption and laundering, according to the recommendations of the investigators to the judges in charge, according to the state press agency Agência Brasil.

The construction company OAS would have refurbished an apartment in Guarujá on the Atlantic coast for the ex-president. In return, 'Lula' would have given the company assignments of oil company Petrobras, a semi-company. Lula rejects the allegations and denies ownership of the apartment.

Against numerous Brazilian politicians, including seated ministers, ex-presidents and Congressmen, investigations are taking place because of the adoption of lows. Lula, who was president from 2003 to 2010, recently announced his candidacy. The presidential elections will be held next year.