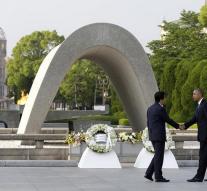 honolulu - Japanese Prime Minister Shinzo Abe on Boxing Day brings a historic visit to Pearl Harbor, the first Japanese prime minister since World War II. Japan bombed the US naval base in December 1941 and the United States withdrew it the war.

Abe holds talks Monday and Tuesday with Obama, who seven months ago was the first American president to visit Hiroshima. The president prayed before the tomb of the 140 000 victims of the first atomic bomb that unleashed the US in 1945 in Japan, followed three days later by that of Nagasaki.

Abe and Obama visits along Pearl Harbor 'to comfort the souls of the victims', as Japanese Prime Minister described it earlier this month. There has been more speculation about a Japanese visiting the memorial to the bombing of Hawaii that the US cost twenty ships and 164 aircraft. Approximately 2,400 people were killed.

Speculation Abe's wife grew when earlier this year unexpectedly went to Pearl Harbor and laid flowers at the USS Arizona Memorial, named after one of the battleships bombed.

The former enemies Japan and the United States are now close allies. Obama and Abe have in recent years used friendship to heal old wounds.

Abe seems that his visit would highlight tapes. That is him probably not appreciated in its own right-wing government, but it is great for the larger Japanese public. Abe that could come in handy, because he can write all elections in January for the Japanese parliament, the Diet.