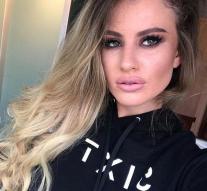 london - The alleged abduction of 20-year-old British model model Chloe Ayling is 'one big publicity stunt'. That claimed the attorney of Michal Konrad Herba, 36, the brother of the main verdict Lukasz Herba, on Monday in a London court. The last summer kidnapping case continues to be puzzled by riddles.

At the Westminster Magistrates' Court, the lawyer argued that there was nothing from the story that the brothers had put their sentences on the model model. They would be part of the Black Dead criminal group who wanted to auction the model on the so-called 'dark web'. The highest bidder should be allowed to do with her and leave what he wants.

George Hepburne Scott, the counselor of the chief suspect's brother, placed a major question on the credibility of Chloe on Monday. 'Previously, she generated publicity because she would have been in a neighborhood near the Champs-Elysees in Paris. This case is also devised to receive attention. It's fraud, 'said Scott in British media. 'In addition, just before the release of Chloe, a mail from the alleged kidnapper was sent to a tabloid, announcing that the victim would be auctioned. '

Chloe was told at the kidnapping in Milan last July that all abducted women eventually ended up in Arab countries. She would have come free when a kidnapper discovered she had a two-year-old daughter. For her release she would have been detained in a remote farm in Turin for a few days.

The ex-manager denies that the case has been put in a position to generate publicity. The judge will decide on Friday whether the brother of the chief suspect will be handed over to Italy.