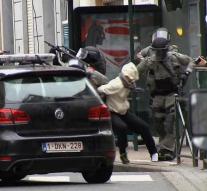 brussels - Salah Abdeslam played a much greater role in the attacks in Paris and Brussels, he made it appear. That assertion Mohamed Abrini, the so-called 'terrorist with the hat', which was known from the picture for the attack on the airport at Zaventem.

VTM News, a Belgian commercial television, the records of the interrogations of Abrini could see after his arrest in his own words.,, What I know about Salah, is that he is but a few all people are going to pick who were involved in the attacks in Paris and who came from Syria. 'Abdeslam, reported VTM, according Abrini played a very important role in the preparations.

,, I know Salah who went to fetch people and deposited on hidden addresses. I know because I've slept with them in an apartment. Then you hear a lot of ', so declared the terrorist. Mohamed Abrini was two days before the attacks in Paris with Abdeslam filmed at a gas station on the highway towards the French capital. He drove the Renault Clio which was used two days later in the attacks. he was arrested April 8th.

A French parliamentary commission has concluded that the Belgian intelligence services have failed to give France Abdeslam, the only surviving suspected member of the terrorist cell behind the attacks in Paris last November, was radicalized. French police Abdeslam held a few hours after the attacks on the Belgian border standing, but was unaware of his jihadist beliefs and activities. They therefore had to go back to him. Abdeslam in Belgium was primarily known as a criminal. About his radicalization had the little Belgian security service information, as did the Belgians in response to the French reproach.

Abdeslam dived in Brussels and was only arrested in March. French police stopped him because Belgium had only entered into the Schengen Information System that he had a criminal record. According to the Committee the French police is therefore to blame.