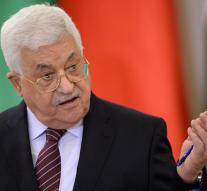 - Palestinian President Mahmoud Abbas was in the 80s a spy for the KGB.

Reported that the Israeli television news, which again relies on research from scientists Isabella Ginor and Gideon Remez. They managed to lay hands on KGB documents from the famous Mitrokhin Archive. This shows that Abbas, who lived in Damascus early 80s, worked for the secret service of the former Soviet Union.

The revelation comes at a remarkable time. Russian President Putin is trying to arrange a meeting between Abbas and Israeli Prime Minister Netanyahu in Moscow. Both leaders, however, claim that the other is not willing to talk directly.


Abbas, who studied in Moscow in the past would have worked as a KGB spy during his time under Michael Bodganov, now a Russian diplomat in the Middle East. Bogdanov tried this week to arrange a meeting between Abbas and Netanyahu.

The Mitrokhin Archive is the collective name for the documents in 1992, archivist Vasili Mitrokhin him when he defected to the West. As a result, for several KGB spies unmasked in the past.