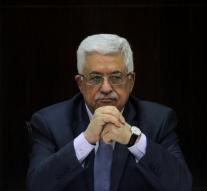 moscow - Palestinian President Mahmoud Abbas confirmed on Monday that he is willing to advance with Israeli Prime Minister Benjamin Netanyahu talks without conditions. The Palestinian embassy in Moscow has announced this. Russian President Vladimir Putin has invited the two leaders to meet in Moscow. Netanyahu has still considering the invitation.

A peace process between the two parties is certainly no longer since 2014. For peace between Israelis and Palestinians should be a Palestinian state alongside Israel, according to the UN. Then Israel must end the occupation of Palestinian land. Numerous negotiations about this failed, while Israel colonizes increasingly occupied territory.