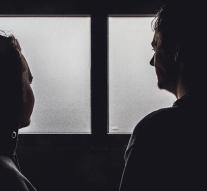 arnhem - The two brothers who were kicked up and hit by a group of young men from Veenendaal on King's Day 2016 are furious after the verdict of the Arnhem court. Their prosecutors were sentenced to work from 40 to 180 hours.

Nick and Mike, now 19 and 16, once decided to do their story in an exclusive interview with The Telegraph. The height of the punishment feels for them as a 'free kick to kick someone's head'.

They call the labor sentences imposed on the perpetrators 'a laugh'. 'We completely lost faith in the legal system,' says oldest brother Nick. 'An unconditional imprisonment had done much more justice to the perpetrators' violence. My whole head was trapped together. It is a transient procedure, otherwise the consequences would have been much worse. '

Both boys ran PTSS. They stopped at school. 'Our future is uncertain. And after a couple of weeks, the perpetrators can grow up with their lives again. 'Mike:' I wonder if a judge who assigns such low punishments for such a serious crime can even look straight into the mirror. '

READ THE FULL STORY: 'Our life is quiet'