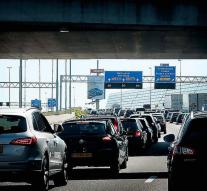 lead - The bottleneck on the A4 near Leiden is on its way to becoming the most dangerous piece of highway in the Netherlands. The number of accidents taking place, has significantly increased from 104 to 135 in one year.

That concludes the Foundation Incident Management Netherlands (SiMn), road authorities and Rijkswaterstaat helps weigh in case an accident or breakdown to release as soon as possible.

'But the first months of this year the weather completely wrong on the bottleneck between Amsterdam and The Hague. Until April we have to deal with it alone forty impacts, so it does not bode well, 'predicts Hans REKKE of Storage Central bulb.


It is all the result of the 600 million-dollar reconstruction of the road which was completed last year. In addition, the circulation was reduced from three to two lanes, while there is also to use a parallel lane is for traffic. Not only does the new situation produces a boom in collisions, even the number of traffic jams on this stretch of the A4 motorway between Amsterdam and The Hague quintupled while it doubled in the opposite route.

'With such a solution, everyone knows that you create problems,' REKKE continues. 'Not only does insert massive congestion on such a busy highway, but it also brings a lot of accidents with it. Knows every traffic expert only at Rijkswaterstaat they obviously have no message to this. '

Most accidents occurred on the Westbaan Den Haag between hectometre poles 32.0 and 33.9. 'Here were last year 54 collisions place, three times as many as in 2014. The roadway runs locally through a tunnel. At the end it is an exit to the N11 and the newly constructed parallel lane of the A4. Just beyond this junction the number of lanes on the main carriageway is reduced from three to two, 'Ivo Wildenberg says the SiMn.


'The narrowing of the road has the effect that at the end of the tunnel, at the height of the exit, often are any files. The combination of narrowing of the road, tunnel and motorway brings motorists spot to maneuvers that do not always end well, 'Wildenberg analyzes.