Home / World / A1 work until well into the afternoon 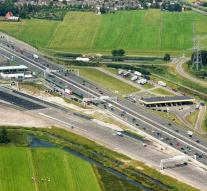 utrecht - Work on the railway bridge over the A1 at Muiderberg are continuing until Monday 15:00. The planning was 5:00 pm on,, tricky demolition 'runs from this, Rijkswaterstaat reports.

Especially the traffic to Amsterdam will be adversely impacted. From Amersfoort is only one lane will be: from 10. 00 pm also be the case open and from Almere.

Road users should take account of delays of over 60 minutes. Also on the alternative route via the A27, A12 and A2 will therefore occur much delay. Rijkswaterstaat advises road users as possible to travel at a different time or to consider working at home.


Rijkswaterstaat is working on large-scale work on the A1. The road is completely renewed. At the same time the old railway bridge will be demolished which spans the highway and the new bridge is located, may be put into use. Only traffic Amersfoort is there from 5. 00 pm now use.

The demolition of the old bridge in Muiderberg proved more difficult than anticipated. Steel was incorporated in the bridge appeared to be very stiff and difficult to remove. In spite of a protective layer of sand (to protect the surface against falling pieces of concrete), the asphalt of the A1 seriously damaged. so the repair before last until well into the afternoon.