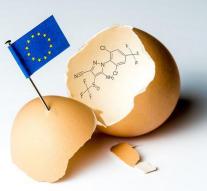 brussels - In the Netherlands another 144 chickens are locked in connection with the egg scandal. There were 281 in Belgium. In Belgium there are still 30 out of 93. They are only unblocked if the amount of toxic fipronil in the eggs and chicken meat is below the maximum EU standards.

That said a high representative of the European Commission during a session on the egg scandal of the European Parliament's Agriculture Committee. She said that contaminated eggs were marketed in 22 countries inside and outside the EU. Ukraine and Oman have another import ban on eggs from the Netherlands, Belgium, Germany and France.

She said that the commission was not informed on July 20, via the European Warning System RRASF, of contaminated eggs in Belgium by using fipronil in the control of blood lice in laying companies. 'There are also indications that illegal treatments have taken place in 2016. 'According to the Dutch Food and Welfare Authority (NVWA) in November, tips on the illegal use of fipronil in egg companies have been received. In the end a criminal investigation was launched.

According to the official, 'we should not trivialize, but the risk to public health seems to have been very limited. 'Many European parliamentarians are angry that it took so long before the information reached the consumer. The committee finds that the warning system works well, but it does investigate whether Member States have used it in accordance with the rules. According to EU parliamentary Jan Huitema (VVD), it may be 'anxiety culture in the Member States' to report such cases.

Due to the scandal, the two directors of the Dutch company Chickfriend are stuck. They would have supplied or used fipronil for cleaning stables with laying hens.