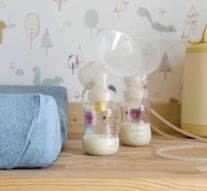 wilmington - A recently given woman who was not allowed to pump milk from her employer Kentucky Fried Chicken during her service, receives compensation of more than 1.5 million dollars.

During a court case, it turned out that the woman was allowed to fry only once during a ten-hour shift. If she could poke, she had to do so in the sight of her colleagues or with surveillance cameras in the neighborhood.