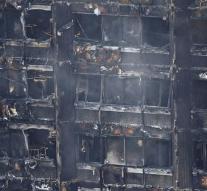 london - A day after the fierce fire in London, many people are still missing. Family members distribute pictures, flyers and seek hospitals to get a sign of their loved ones' lives.

A family with three young girls is still missing after a flat in West London has burned completely. Family members of the parents and their three girls, called Mirna, Fatima and Zainb, seek out all hospitals in the hope of seeing the family there.

Jessica, 12-year-old cousin of Natalie Garcia is also missing. Her parents had just broken out for the last contact with Jessica. Teenage girl Nurhuda El-Wahabi and her 21-year-old brother Yasin were at the time of the fire in their apartment and have not been seen since.

The police reported Wednesday that at least 12 people were killed. 86 people were injured, of whom 18 are in critical condition. More deadly victims are taken into account because emergency services have not yet been able to reach everyone who lived in the tower or was present. The cause of the fire is being investigated.