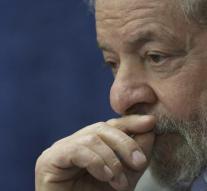 He was president of the Left-wing Labor Party (PT) from early 2003 to 2011. According to the court in this criminal case, he would have received bribes of about one million euros from a large construction company.

Lula da Silva is accused of a total of five criminal cases of corruption. This is the first statement.