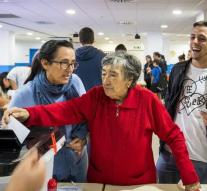 - In total, 90 percent of Catalans voted for independence. That reports the regional management.

The Catalan Deputy Prime Minister Oriol Junqueras said that members of the public consultation voted over 2 million (90 percent) for independence. Approximately 176,500 people (7.8 percent) voted against. In addition, approximately 45,500 people (2 percent) gave a blank vote and more than 20,000 votes (0.9 percent) were declared invalid. The turnout was about 42 percent.

Catalan regional leader Carles Puigdemont called the outcome of the referendum "impressive." On Sunday evening Puigdemont had said that he would submit the results to the Catalan Parliament within two days of the publication of the outcome of the referendum, because "the sovereignty of the people. "The people's representatives can then call on the independence of Catalonia.

The independence referee in Catalonia was a day of irregularities. According to the Ministry of Health, approximately 850 people were injured, most in Barcelona. Also, over thirty agents injured injuries.

The Spanish government declared illegal parliamentary consultation and, like the supreme judges in Madrid and Barcelona, ​​decided that the poll should not continue. Thousands of agents were sent to Catalonia because the Catalan police, the Mossos d'Esquadra, drew a lot of reservations. Particularly agents of the federal Guardia Civil were deployed to frustrate the ballot box. However, according to the Catalan government, 96 percent of the polling stations could be voted.