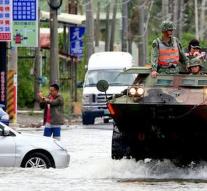 taipei - In a typhoon in Taiwan, eighty-eight people are injured on Sunday. This is mainly about rescue workers affected by the debris, according to the Taiwanese government. Hundreds of thousands of people came without power.

In the capital of Taipei, schools and businesses were closed and garbage collection services and other facilities were shut down. The Taiwan airline Eva Airways Corp has canceled 42 flights.