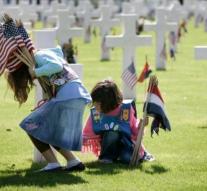 eijsden - The US military cemetery in the Limburg Margraten again expects thousands of visitors to the annual commemoration of the soldiers from the country that fell during the Second World War in the liberation of Europe on Sunday. On behalf of the Cabinet, Deputy Minister Ronald Plasterk (Interior Affairs) has a wreath. He also holds a speech.

At the cemetery, 8301 American soldiers, who crossed Western Europe, crossed. On a monument there are also the names of 1722 missing American soldiers. The anniversary in Margraten, held for the 73th time, takes place traditionally on the last Sunday of May, one day before the celebration of Memorial Day in the US.

All graves in the graveyard and names on the monument have been 'adopted'. The people who did that put flowers on the graves in the days before the commemoration. Also, schoolgirls from the surrounding area decorate the tombs with American and Dutch flags.

The anniversary is attended by approximately 6000 people annually. The meeting is attended by an army guard and crane carriers. Air Force F-16s fly in so-called missing man formation across the cemetery.