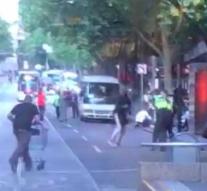 canberra - The passerby who attacked the attacker in Melbourne with a shopping cart, keeps a nice amount of money. Australians are collecting money online for the 46-year-old Michael Rogers. Monday morning the counter stood at 110,000 Australian dollars, which translates to around 70,000 euros. A nice boost for Rogers, who is reportedly homeless, according to broadcaster ABC.

'Not all heroes wear capes,' is the headline of the Rogers fund raising campaign on GoFundMe. On Friday, he rammed the perpetrator several times with a shopping cart when he waved a knife toward two agents. Images of this were shared on social media.