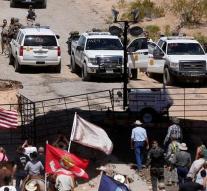 las vegas - In the lawsuit on the rebellion against federal authorities in 2014 on the ranch of farmer Cliven Bundy, a man was convicted for the first time on Wednesday.

A 53-year-old man from Phoenix has received 68 years of imprisonment from the court. He was found guilty of eight crimes including threatening and attacking federal agents and obstruction of the legal order.

The revolt on the Bundy farm, about 120 kilometers north of Las Vegas, occurred in 2014 when federal agents took the farmer's cattle because he refused to pay for grazing the animals in the public domain.

Of seventeen people who are in court, Burleson is the first to be convicted. Another accused who was found guilty by the same jury will hear his sentence in September. Two other groups, including Bundy and his sons, come to court later this year.