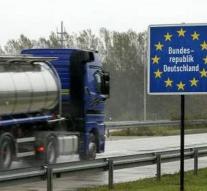 berlin - The stricter border controls ordered by the German security authorities in the run-up to the G20 have produced a large by-catch. The Westendutsche Allgemeine Zeitung (WAZ) reported Monday that the action, which began on June 12, resulted in 673 arrest orders for offenses. They had nothing to do with the meeting of government leaders and heads of state of the world's leading countries in Hamburg.

The G20 summit was freaked out by serious irregularities. To refuse foreign rioters, the German Interior Minister Thomas de Maizière had instructed the police and customs to tighten up surveillance at the Schengen border for a month. It will continue until Tuesday evening. It is not yet known how many potentially violent protesters were arrested or arrested.