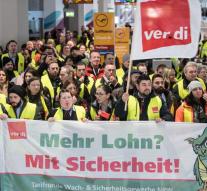 dusseldorf - In Germany, Thursday 643 flights were canceled at the airports of Düsseldorf, Cologne / Bonn and Stuttgart. This has to do with a strike of about a thousand security employees. She…

In all, 1054 flights were planned at the three airports. It is estimated that around 115,000 travelers suffer from the strike. The Verdi trade union, which works for around 23,000 security people, has announced that the strike will last until the end of the day. The discussions about the salaries of security people will be resumed on 23 January.

The trade union demands a wage of 20 euros gross per hour.