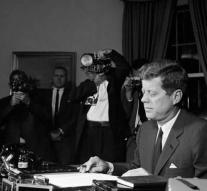 moscow - During the Cuba crisis of 55 years ago, when the United States and the Soviet Union were on the verge of a nuclear war, only one dead would have fallen, the pilot of an American espionage plane that was taken down. Now Russia says that between August 1962 and August 1964, 64 Soviet soldiers also disappeared. According to a military historian, many accidents occurred.

The crisis occurred in October 1962 because the Soviet Union placed missile bombs on Cuba. In addition to the 64 missiles, the Soviet Union also sent 42,000 soldiers to the island. 'When heavily stocked, when conditions are difficult, when everything has to happen quickly, accidents happen,' said the director of the Military Military Society of Russia, Michail Myagkov. Soviet soldiers also came to work during clearance operations after Cuba had been hit by a hurricane in 1963.

It was Saturday 55 years ago that the first Soviet missiles arrived in Cuba. The US placed a sea blockade around the island. The crisis ended when US President John Kennedy failed to attack Cuba. Soviet leader Nikita Chroesjstjov ordered the withdrawal of the missiles.