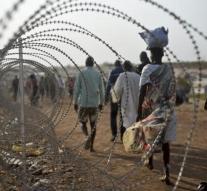 geneva - About 60,000 people have fled over the past three weeks because of escalating violence in South Sudan, most to neighboring Uganda. According to the UN refugee agency UNHCR are taking armed gangs actively stopping and back hunting displaced.

The humanitarian situation in the newly independent country five years deteriorates seriously by the resurgence of violence. In many areas, food and medicine hardly available. For nearly half of the 11.2 million people in danger of famine, says the European Commission earlier.