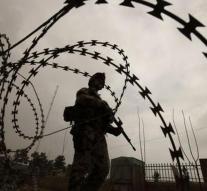 - The German armed forces stationed in February about 500 soldiers in Lithuania. They have access to 26 armored vehicles, including six Leopard 2 tanks, and about 170 other military vehicles. The stationing of NATO troops in the country should have a deterrent effect on Russia. A total of 4,000 foreign troops are previously sent to the Baltic states and Poland.

Germany maintains command in the Lithuanian focal rukla, where units from the Netherlands, Belgium and Norway will be accommodated. The Dutch arrive in March. 'I think NATO displays a strong signal of solidarity within the alliance,' said the commander of the 122nd infantry battalion from Bavaria Wednesday during the presentation at the training area Grafenwöhr.

Three hundred soldiers in his barracks at the core of the Lithuanian Department. They are accompanied by 150 to 200 colleagues from the military police, engineers and medical service. Lithuania is investing 5.8 million euros for the adaptation of infrastructure for the NATO base.