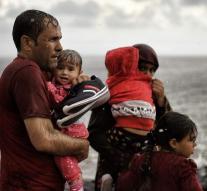 - Around the world have had to leave nearly 50 million children homes by violent conflict. UNICEF outlined in a new report a harrowing picture of life and the situation of millions of children and their families. The protection of these children needs to be improved.

According to UNICEF, half of all refugee children. In 2015, nearly half of all children in Syria or Afghanistan.

Anthony Lake, Executive Director of UNICEF:,, Indelible images of children fleeing shock the world. Every image, every girl and every boy represents many millions of children at risk. '


About 20 million children have been displaced by eg extreme poverty or violence of gangs.,, Many are at risk of abuse and detention because they have no papers, 'says Lake.,, They fall between the cracks.'