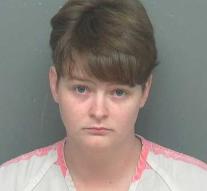 montgomery - Sarah Peters has been in prison for forty years after she had arranged a meeting with a man who wanted to pay £ 900 to have sex with her 2-year-old daughter.

The man with whom the 25-year-old woman from the American state of Texas had agreed to be an undercover policeman. That reports Mirror.

Prior to the 'appointment', the toddler's mother had already taken and shared nude photos of her daughter. The woman had met the man on an online forum and was planning to make money by lending her daughter for sex with adult men.

Detective Jerry Serratt waited for the woman with her daughter at the agreed meeting place, after which the mother was beaten. The detective was part of a large-scale investigation against child abuse.

The mother of the toddler was sentenced to 40 years in prison by the judge last Thursday. 'It is too bizarre for words. That a mother would be willing to sell her daughter for sex is incredible, 'said the judge.